Structure of a microbial hydrogen engine 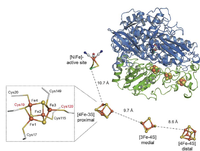 Molecular hydrogen is discussed as promising renewable energy source and attractive alternative to fossil fuels. Many microorganisms exploit the beneficial properties of hydrogen already since more than two billion years. They accommodate dedicated enzymes that either split or evolve molecular hydrogen according to the specific metabolic requirements of the cell.

An interdisciplinary team of scientists headed by the UniCat researchers Oliver Lenz and Bärbel Friedrich from Humboldt-Universitaet zu Berlin and Patrick Scheerer and Christian Spahn from Charité - Universitätsmedizin Berlin now succeeded in solving the first X-ray crystal structure of a hydrogenase that produces hydrogen even at atmospheric oxygen concentration.

The X-ray crystal structure allows detailed insights into the three-dimensional architecture of the enzyme and its metal cofactors which participate in catalysis. The results have been published in Nature online (http://dx.doi.org/10.1038/nature10505). Interestingly, the hydrogenase contains a novel iron-sulfur center which acts as an electronic switch in the course of detoxification of detrimental oxygen. With this discovery, the scientists could substantiate the hypothesis that this particular group of hydrogenases is able to convert both, hydrogen and oxygen in a catalytic manner. During catalysis, oxygen becomes reduced to harmless water.

The new results are particularly relevant for fundamental research. Moreover, also the biotechnological application of hydrogenases, e.g. solar-driven hydrogen production by photosynthetic microorganisms and enzyme-driven biological fuel cells, may profit from the new findings. Furthermore, it is anticipated that the novel iron-sulfur center will inspire chemists to design model compounds with improved catalytic properties.