Light–oxygen–voltage (LOV) receptors sense blue light through the photochemical generation of a covalent adduct between a ﬂavin-nucleotide chromophore and a strictly conserved cysteine residue. Here we show that, after cysteine removal, the circadian-clock LOV-protein Vivid still undergoes light-induced dimerization and signalling because of ﬂavin photo-reduction to the neutral semiquinone (NSQ). Similarly, photoreduction of the engineered LOV histidine kinase YF1 to the NSQ modulates activity and downstream effects on gene expression. 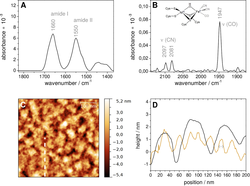 Protein immobilization on electrodes is a key concept in exploiting enzymatic processes for bioelectronic devices. For optimum performance, an in-depth understanding of the enzyme-surface interactions is required. Here, we introduce an integral approach of experimental and theoretical methods that provides detailed insights into the adsorption of an oxygen-tolerant [NiFe] hydrogenase on a biocompatible gold electrode.

Using atomic force microscopy, ellipsometry, surface-enhanced IR spectroscopy, and protein film voltammetry, we explore enzyme coverage, integrity, and activity, thereby probing both structure and catalytic H2 conversion of the enzyme. Electrocatalytic efficiencies can be correlated with the mode of protein adsorption on the electrode as estimated theoretically by molecular dynamics simulations. Our results reveal that pre-activation at low potentials results in increased current densities, which can be rationalized in terms of a potential-induced re-orientation of the immobilized enzyme. 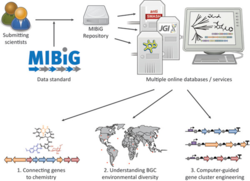 A wide variety of enzymatic pathways that produce specialized metabolites in bacteria, fungi and plants are known to be encoded in biosynthetic gene clusters. Information about these clusters, pathways and metabolites is currently dispersed throughout the literature, making it difficult to exploit.

To facilitate consistent and systematic deposition and retrieval of data on biosynthetic gene clusters, we propose the Minimum Information about a Biosynthetic Gene cluster (MIBiG) data standard.

We have applied resonance Raman (RR) spectroscopy on single protein crystals of the O2-tolerant membrane-bound [NiFe] hydrogenase (MBH from Ralstonia eutropha) which catalyzes the splitting of H2 into protons and electrons.

RR spectra taken from 65 MBH samples in different redox states were analyzed in terms of the respective component spectra of the active site and the unprecedented proximal [4Fe-3S] cluster using a combination of statistical methods and global fitting procedures. These component spectra of the individual cofactors were compared with calculated spectra obtained by quantum mechanics/molecular mechanics (QM/MM) methods.

Thus, the recently discovered hydroxyl-coordination of one iron in the [4Fe-3S] cluster was confirmed. Infrared (IR) microscopy of oxidized MBH crystals revealed the [NiFe] active site to be in the Nir-B [Ni(III)] and Nir-S [Ni(II)] states, whereas RR measurements of these crystals uncovered the Nia-S [Ni(II)] state as the main spectral component, suggesting its in situ formation via photodissociation of the assumed bridging hydroxyl or water ligand.

On the basis of QM/MM calculations, individual band frequencies could be correlated with structural parameters for the Nia-S state as well as for the Ni-L state, which is formed upon photodissociation of the bridging hydride of H2-reduced active site states.

Chemical Evolution of a Bacterial Proteome

These evolved bacteria with new-to-nature amino acid composition showed robust growth in the complete absence of Trp. Our experimental results illustrate an approach for the evolution of synthetic cells with alternative biochemical building blocks. 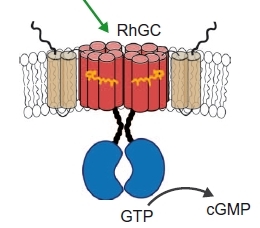 When expressed in mammalian cells, including neurons, light stimulated RhGC to generate cGMP. Thus, RhGC is another tool in the optogenetic kit and can be used to study cGMP signaling. 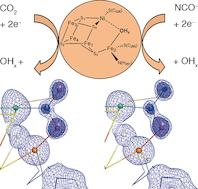 Ni,Fe-containing CO dehydrogenases (CODHs) use a [NiFe4S4] cluster, termed cluster C, to reversibly reduce CO2 to CO with high turnover number. Binding to Ni and Fe activates CO2, but current crystal structures have insufficient resolution to analyze the geometry of bound CO2 and reveal the extent and nature of its activation. The crystal structures of CODH in complex with CO2 and the isoelectronic inhibitor NCO− are reported at true atomic resolution (dmin≤1.1 Å). Like CO2, NCO− is a μ2,η2 ligand of the cluster and acts as a mechanism-based inhibitor.

While bound CO2 has the geometry of a carboxylate group, NCO− is transformed into a carbamoyl group, thus indicating that both molecules undergo a formal two-electron reduction after binding and are stabilized by substantial π backbonding. The structures reveal the combination of stable μ2,η2 coordination by Ni and Fe2 with reductive activation as the basis for both the turnover of CO2 and inhibition by NCO−.

HTHP binds to the positively charged surface but no direct electron transfer (DET) is found due to the long distance of the active sites from the electrode surfaces. At carboxyl-terminated surfaces, the neutrally charged bottom of HTHP can bind to the SAM. For this “disc” orientation all six hemes are close to the electrode and their direct electron transfer should be efficient. HTHP on all negatively charged SAMs showed a quasi-reversible redox behavior with rate constant ks values between 0.93 and 2.86 s−1 and apparent formal potentials

between -131.1 and -249.1 mV. On the MUA/MU-modified electrode, the maximum surface concentration corresponds to a complete monolayer of the hexameric HTHP in the disc orientation. HTHP electrostatically immobilized on negatively charged SAMs shows electrocatalysis of peroxide reduction and enzymatic oxidation of NADH.

Early Formation of the Ion-Conducting Pore in Channelrhodopsin-2 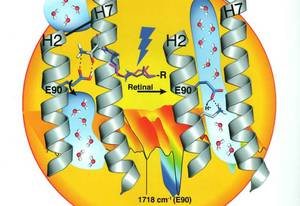 Channelrhodopsins (ChRs) are light-gated ion channels that are widely used in optogenetics. They allow precise control of neuronal activity with light, but a detailed understanding of how the channel is gated and the ions are conducted is still lacking.

The recent determination of the X-ray structural model in the closed state marks an important milestone. Herein the open state structure is presented and the early formation of the ion conducting pore is elucidated in atomic detail using time-resolved FTIR spectroscopy. Photoisomerization of the retinal-chromophore causes a downward movement of the highly conserved E90, which opens the pore. ...

Covalent attachment of a microporous polymer network (MPN) on a gold surface is presented. A functional bromophenyl-based self-assembled monolayer (SAM) formed on the gold surface acts as co-monomer in the polymerisation of the MPN yielding homogeneous and robust coatings. Covalent binding of the films to the electrode is confirmed by SEIRAS measurements.

Oxygen-tolerant [NiFe] hydrogenases are metalloenzymes that represent valuable model systems for sustainable H2 oxidation and production. The soluble NAD+-reducing [NiFe] hydrogenase (SH) from Ralstonia eutropha couples the reversible cleavage of H2 with the reduction of NAD+ and displays a unique O2 tolerance.

Here we performed IR spectroscopic investigations on purified SH in various redox states in combination with density functional theory to provide structural insights into the catalytic [NiFe] center. These studies revealed a standard-like coordination of the active site with diatomic CO and cyanide ligands.

The long-lasting discrepancy between spectroscopic data obtained in vitro and in vivo could be solved on the basis of reversible cysteine oxygenation in the fully oxidized state of the [NiFe] site. The data are consistent with a model in which the SH detoxifies O2 catalytically by means of an NADH-dependent (per)oxidase reaction involving the intermediary formation of stable cysteine sulfenates. The occurrence of two catalytic activities, hydrogen conversion and oxygen reduction, at the same cofactor may inspire the design of novel biomimetic catalysts performing H2-conversion even in the presence of O2.