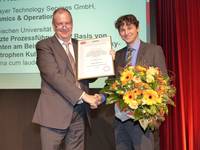 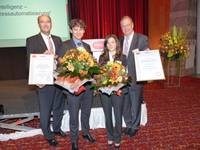 Niko Rossner from UniCat Professor Rudibert King’s research group has received the 2014 NAMUR Award. The award ceremony was on November 7, 2014 in Leverkusen.

The former Unicat doctoral student, Niko Rossner, has been honoured for his dissertation entitled, "Robust model-based process control on the basis of Gaussian mixture density according to the example of the Bray-Liebhafsky reaction and the autotrophic cultivation of Ralstonia eutropha H16".

In his doctoral thesis, Niko Rossner has dealt with the efficiency improvement in process technology. The manufacturing industry demands ever more efficient technical processes. This development is driven by an increasing shortage of resources as well as market liberalisation leading to more competition and financial pressure.

Until 2012, Niko Rossner prepared experiments for his doctoral thesis in UniCat’s Research Field E3. Even prior to the defence of his work in 2014, he went to Bayer Technology Services (BTS).

The NAMUR Award is presented annually to a selected diploma or master’s thesis and for a selected doctoral thesis. The prize for dissertations is endowed with 2,000 Euro.