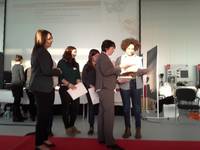 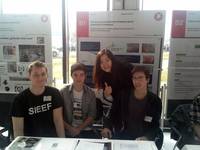 Ying Ma (3rd from left) and her mentees 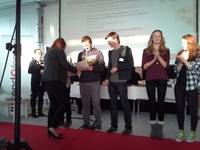 On February 12, 2014, the best research projects submitted within the Berlin youth research competition "Jugend forscht" (“youth researches”) were crowned. Two projects supported by two BIG-NSE students, Mikaela Görlin and Ying Ma, received the first prize on the Berlin level in the respective categories "work environment" and "biology". During the coming weeks, the two projects will be optimized before they will have been submitted again on a national competition level.

Mikaela Görlin (BIG-NSE batch WS12, research group of Prof. Peter Strasser) helped Lea Pahl (11th class) on a project with the title "Cheaper alkaline electrolysis with the help of non-noble catalysts". Between mid-September 2013 and February 2014, Lea Pahl came several times to Mikaela Görlin's lab and performed her research experiments under Mikaela's supervision. The project was submitted in the category "work environment" and got the first prize on the Berlin level.

Ying Ma (batch WS12, research group of Prof. Nediljko Budisa) was supervisor of three from the 11th: Jonathan Sonntag, Christian Smettan and Nico Stiehl. The performed a project with the title "Production of synthetic proteins from modified bacteria".

They spent several hours performing biotechnological experiments in her lab too. Their project was submitted in the category "biology" and got the first prize in this category on the Berlin level as well.

The support by some of the BIG-NSE students results from a collaboration between BIG-NSE and Dr. Angela Köhler-Krützfeldt, teacher at the Romain-Rolland-Gymnasium ("Roro") in the northern part of Berlin.

Jugend forscht (literal translation: “Youth researches”) is a German youth science competition which was initiated in 1965. It is the biggest youth science and technology competition in Europe, with more than 10,000 participants annually.

Participants work on a self-chosen research project, hand in a written report about their work, and then present their results first at regional levels and later at a national contest to an expert jury, usually in the form of a poster session, often including a practical demonstration. Contest juries often invite university or industry experts to referee some of the projects, especially at the national contest, due to a high level of specialization.