Our fourth Research Band (D4/E4) is dedicated to the non-invasive analysis of complex and coupled catalytic networks in cellular systems.

After identification and characteri­sation of key components and the analysis of their mechanistic interactions using new developed chemical and biological tools, the studies eventually aim for altering and optimising the function of the overall system i.e. synthetic biology and optogenetics. 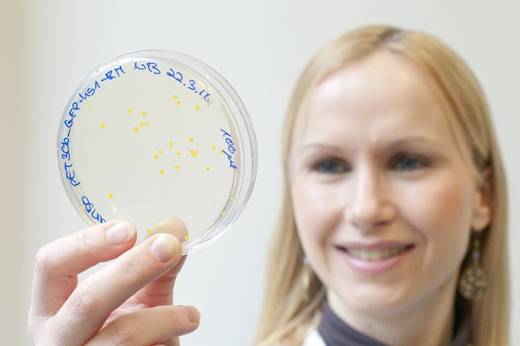 Innovative methods in homogeneous catalysis to synthesise biocompatible building blocks, developed in D4, are essential both for the analyses of the catalytic mechanisms and for communication between the coupled modules, as well as for the manipulation of the overall processes.

Understanding the molecular function of sensor and catalyst and the coupling of both entities is a prerequisite for constructing novel light-gated enzyme complexes and thus requires molecular structure information in a wide dynamic range with the help of tailored spectroscopic techniques in combination with protein labelling techniques (E4-1). These approaches include the synthesis of isotopically labelled cofac-tors and spectroscopic probes (D4-1) introduced into the proteins via genetic engineering and post-translational modifications.

Further expansion of the structural diversity of the peptide products may be achieved by incorporating bio-orthogonal (non-biological functionality) reactive groups for post-translational chemical modifications (D4-2). Here the central challenge is to develop synthetic routes for novel catalytic transformations in aqueous environments, including biocompatible olefin metathesis for biological systems to provide access to C=C bond formation under physiological conditions.

For both compound classes appropriate biosynthetic systems that, as a result of the first funding period, can be expressed in E. coli are available and can now be engineered by genetic methods. Such manipulations serve for both analysing structure-function relationships of the target enzymes and for generating new peptides structures either by mutations on the DNA level (site-directed mutagenesis, module swapping, synthetic DNA) or by the re-interpretation of the genetic code by codon re-assignment.

In project E4-2 photoreceptors coupled with catalytic modules will be retrieved from natural sources or assembled from enzymatic and photoresponsive modules. The generated light-gated enzymes will be studied in detail in close collaboration with researchers from D4. On the basis of promising results achieved in the 1st funding period, we will first focus on the photo-activated cyclases (PAC) by exchanging, on the one hand, the catalytic module from an adenylate to a guanylate cyclase.

On the other hand, we aim at replacing the PAS (Per-Arnt-Sim) domain of a light insensitive guanylate cyclase of Beggiatoa by a BLUF (blue-light using FAD) or LOV (light-oxygen-voltage) domain to achieve light-control of this catalyst. Whereas these studies are restricted to photoreceptors in the blue spectral region, expanding the light-control to the red or near-infrared region is of particular interest in view of potential medical application. On the basis of available structural information, a red-light-regulated phosphodiesterase (PDE) will be designed by fusing the catalytic domain of H. sapiens PDE2A to the photosensor module of a bacteriophytochrome (Deinococcus radiodurans).