Upon receiving grants from EU and Marie Curie Actions, Dr. Zeynep Altintas moved to Berlin University of Technology to conduct multidisciplinary projects in close collaboration with UniCat researchers. Before joining TU-Berlin she worked around one year in Biotechnology Centre of Cranfield University as post-doctoral research fellow.

Then she joined to Biomedical Engineering Department as a faculty member where she was one of core lecturers in the department for teaching as well as thesis advisor of several MSc and PhD students in the field of biosensors and molecularly imprinting polymer technologies.

UniCat asks her about her research, her cooperation, and plans for the future.

Dr. Altintas, you are going to cooperate with the UniCat groups of Maria Mroginski, Frieder Scheller, Roderich Süssmuth, Peter Hildebrandt, and Prof. Reinhard Schomäcker. These groups investigate different topics. What is the main common issue of your contribution?

Two of the key elements of my current projects are molecularly imprinted polymers (MIPs) and their use in disease diagnostic as recognition elements. These processes rely on molecular recognition and ligand-target interaction as it is the case in catalysis. Designing of MIPs is a critical issue for its success and I employ virtual screening methods to determine the best manufacturing recipes which decrease the cost considerably by eliminating the monomers which possess weak interaction and binding energy against target molecule.

A MIP is a polymer that has been processed using a technique which creates template-shaped cavities in polymer matrices. The process usually involves initiating the polymerization of monomers in the presence of a template molecule that is extracted afterwards, thus leaving complementary cavities behind?

Yes, I also simulate the behavior of my target molecules which are protein based disease biomarkers in water and buffer environments using molecular dynamic methods to analyze their stability, conformational changes. They play an important role in real world application as we need to use these aqueous conditions during the imprinting process of the target molecules as well as in their detection.

That’s right. For this project, I am focusing on enolase biomarkers whose label-free detection can be increased via electrochemical catalysis for signal amplification using metal ions and this allows to detect trace amounts of this biomarker in cancer cases which may hold a promise for clinical diagnosis. On the other hand, MIPs can also be developed as artificial enzymes or cofactors to be used in catalytic reactions.

In the current project, I aim to develop biomimetic receptors for various disease biomarkers for non-invasive detection of the cancer from blood samples. Prof Schomäcker, Prof Mroginski, Prof Hildebrandt, Prof Scheller and Prof Wollenberger are my collaboration partners in this project. Prof Schomäcker hosted MIP-based projects before where they investigated catalysis of a Diels-Alder cycloaddition with molecularly imprinted polymers and this gives us opportunity to exchange the ideas.

What role does catalysis play in your research? 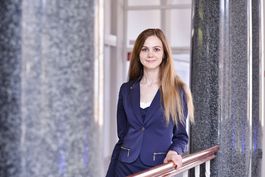 I am also aiming to develop MIPs as catalyst to be used in bio- and chemical catalysis within the collaboration with UniCat scientists in the future. Moreover, since my project is a multidisciplinary project, it brings various disciplines together. For example, I collaborate with Prof Mroginski in computational phase of the project. As being pioneering scientists in biomimetic sensors and electrochemistry, Prof Scheller and Prof Wollenberger are my collaboration partners in MIP manufacturing and electrochemical investigations parts, respectively. Prof Hildebrandt’s expertise in the field of spectroscopy is also necessary in the project for better understanding of the interactions using characterization studies. The successful integration of his tools into my research is important since MIPs can also be designed and used as catalyst both in chemical and biological processes. Additionally, I am aiming to develop MIPs as catalyst in biological and chemical reactions in my future projects.

You have successfully applied for an IPODI fellowship. IPODI is the International Post-Doc Initiative of the Berlin University of Technology; a third party funding project within the EU’s Seventh Framework Program for Research and Technological Development. How did you become aware of the IPODI program? What are the special benefits for you?

I have heard about IPODI program from one of my colleagues. It is a prestigious program aiming to increase the number of female leaders in the academia. With this project, I have built up a very good scientific network and using its successful outputs I am now applying for long term fundings to employ researchers for my research group.

Another very special benefit is that it gave me opportunity to work in collaboration with great people here and these collaborations have continued with my other projects as well.

You have two offices in TU Berlin and one office in Potsdam University for a short period of time. What do you do in your spare time?

Although it is hard to find time anymore, I play violin, make oil painting and marbling, and writing essays in my spare times. Additionally I love travelling.

Thank you very much for the interview.