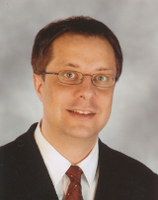 Dr. Marek Sierka has accepted an appointment at Friedrich-Schiller-Universität Jena. He will start as a professor for Computational Materials Science on January 01, 2012 at Institute of Materials Science and Technology at the Faculty for Physics and Astronomy.

Afterwards he joined the quantum chemistry research group at the Humboldt University in Berlin where he received his PhD in 2001 with Prof. Joachim Sauer. For his PhD thesis he received the Humboldt (2001) and Joachim Tiburtius (2001) prize. From 2001-2004 he was postdoctoral fellow with Reinhart Ahlrichs at the University of Karlsruhe.

In 2004 he returned to Berlin and after habilitation in 2009 holds a permanent position as a lecturer (Privatdozent) and research fellow at the Humboldt University.

Since 2007 he is part of UniCat  working on Research Fields A1 and D1. "Marek Sierka has made a significant contribution to the success of the first funding period with his excellent work in the area of theoretical models of MgO and Li-MgO clusters," says UniCat chair Prof. Matthias Driess.