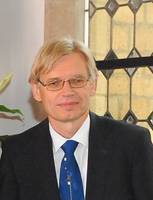 The winners of Germany's most prestigious research prize have been officially announced. At its meeting in Bonn today, the Joint Committee of the Deutsche Forschungsgemeinschaft (DFG, German Research Foundation) named eleven researchers, two women and nine men, as the winners of the 2013 Leibniz Prize. UniCat-Professor Dr. Peter Hegemann (57) from Humboldt-Universität zu Berlin is one of them. He will receive a € 2.5 million cash prize. The award ceremony will take place in Berlin on March 19th 2013.

Peter Hegemann has made substantial contributions to furthering the still-new research area of neuroscience. He is one of the originators of optogenetics.

Sometimes, it is specifically the most unremarkable organisms that are responsible for scientific progress. The single-celled freshwater alga Chlamydomonas reinhardtii and the saltwater archaeon Natronomonas pharaonis are prime examples of this. Both have photoreceptor proteins known as rhodopsins for orientation and energy production. Scientists have been using these light-sensitive proteins for some years now to investigate the workings of cells. Using genetic engineering Rhodopsins are used to infiltrate nerve cells and can then be activated and deactivated through, for example, light. This enables scientists to study the functions of single cells or cell types and the coupling of these cells.

In 2002, Peter Hegemann, who was working at that time at the University of Regensburg with the two Max Planck scientists Georg Nagel and Ernst Bamberg, successfully provided a conclusive demonstration of the extraordinary action of algae rhodopsins. The scientists transferred the rhodopsin genes to proteins from both the clawed frog and human kidney cell lines, and were thus able to show that the algae proteins bring together photoreceptors and an ion channel in a single protein. When exposed to light at a specific wavelength, the protein channel then becomes permeable to positive potassium and sodium ions and protons, thereby making the cell potential positive (depolarisation). This makes the algae rhodopsins different from most other light-sensitive proteins such as the rhodopsins in the human eye, which do not have their own ion channel.

Following this discovery, the scientists began using these proteins, which they called channelrhodopsins, as tools for investigating cells. Equipped with the gene for the channelrhodopsin-2 protein, a wide variety of cell types can be provided with a light switch, enabling scientists to analyse the effects of changes to the ion composition or the pH value.

Optogenetics is also suited to the study of neurological conditions such as epilepsy, Parkinson's disease or depression. Genetically modified animals with disease patterns that are similar to human illnesses and that have been provided with channelrhodopsin genes are important tools in this research. An example of the aim of such studies might be the controlled switching on and off of nerve cells as required in the brain of patients with epilepsy or Parkinson's disease using fibre optics, with the aim of suppressing the specific symptoms of the conditions.

Optogenetics could also be put to other medical uses in the future. As long ago as 2006 and 2008, researchers enabled blind mice to see again. To do this they introduced channelrhodopsin into the nerve cells of the retina of mice which, due to a genetic defect, could not produce photoreceptor cells. After this treatment, the animals could at least differentiate between light and dark. It is possible that genetic therapy using channelrhodopsins could also help people with a disease of the retina known as macular degeneration to recover at least some of their sight.