We are very sad to announce that Dr. habil. Detlef Schröder passed away unexpectedly on the 22nd of August 2012. 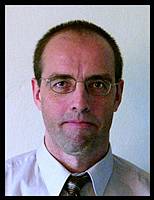 Dr. Schröder was an early member in the start-up phase of the UniCat Cluster of  excellence and he always stayed conjoined with the Cluster. His sudden death is deeply mourned on both a personal and academic level, and we would like to extend our heartfelt condolences to his family. Our thoughts are also with his colleagues and friends.

Dr. Schröder was born in Wilster and studied chemistry at the Technische Universität in Berlin (TU Berlin), where he graduated 1989. He completed his Ph.D. at the same university under the supervision of Professor Helmut Schwarz. From 1989–2006 he worked as scientific researcher at the Institute for Organic Chemistry of the TU Berlin, accomplishing thereby his habilitation, which he gained in 2007.

His death was a shock to us all. We have lost a valued friend and colleague and an excellent scientist.

On behalf of the UniCat Executive Board,