UniCat has again been successful within the framework of the German Excellence Initiative and is to found the Gerhard Ertl Center as its new headquarters.

All future major science and joint projects and the corresponding interdisciplinary promotion of young scientists in the field of catalysis and chemical energy research in the Berlin area will be organised and located within the Gerhard Ertl Center from UniCat’s second funding period (2012-2017) onwards.

The Center will serve as a think tank, a host institution for outstanding guest scientists, a location for press conferences and strategy meetings and the home of our graduate school BIG-NSE.

You are cordially invited to the opening of this pioneering Center.

After some short welcome speeches from noted figures in the fields of politics and science, a number of top-class scientific lectures will follow. Prof. Gerhard Ertl, Nobel Laureate for Chemistry who has given his name to our new Center, will start with a talk on catalysis and surface science. 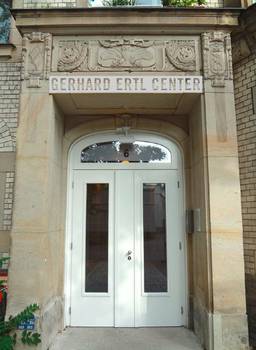 Reception in the BEL Building in the TU Berlin