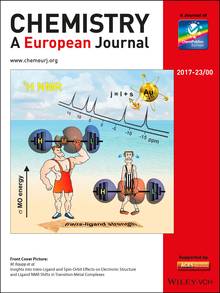 Invited for the cover of this issue is the group of Martin Kaupp at the Technical University Berlin. The image depicts remarkably general and large trans ligand effects on NMR shifts in 5d transition-metal complexes, and their main MO origins.

What was the biggest surprise (on the way to the results presented in this paper)?

In principle, it is known that the chemical environment and thus ligand influences affect the NMR signal of a certain nucleus. How-ever, it was really surprising how large ligand influences can become for systems containing heavy metals once spin-orbit (SO) coupling is considered. Considering that the SO contribution has its origin at the heavy-metal center, it was not expected that the NMR signal can change from highly shielding to highly deshielding as a function of only one ligand in the system—the trans ligand in our research. Moreover, the generality of this systematic behavior encompassing 5d10,5d8 and (to a lesser extent) 5d6 transition-metal complexes, with linear, square-planar, and pseudo-octahedral coordination, respectively, was striking. Although the investigations concentrate on 1H NMR shifts, other nuclei such as 13C are affected in a very similar way.

What was the inspiration for this cover design?

Ligands in a transition metal complex can be characterized as “weak” or “strong” ligands regarding their ability to influence the ligand trans to themselves. Hence, we decided that the cover design should be based on the confrontation of “weak vs. strong”. Playing with ideas on “tug of war with a NMR spectrum”, “arm wrestling with a weak and a strong arm”, and “weightlifting”, we chose the latter one, as it could be easily combined with the ob-served destabilization of a σ-type MO by strong ligands: the 2σ-MO-barbell, that was found to be of particular importance for the different SO contributions to the 1H NMR shifts for a series of Au(I) hydrides, can be lifted significantly higher by the strong (trans-in-fluence) weightlifter than by the weaker one. The trained men to-gether with the golden representation of the SO coupling, remind-ing us of the sun, inspired the beach motif.

Who designed the cover?

Anja H. Greif came up with the weightlifting idea in combination with the destabilization of the σ-type MO and drew the two weightlifters. Peter Hrobárik placed them on the beach and ar-ranged the picture.


An interview of "Chemistry A European Journal" with Prof. Dr. Martin Kaupp.