A unique research concept has been implemented to overcome the artificial fragmentation of catalysis research in different disciplines, and in response to the increasing importance of interactions between chemical and biological catalysis. The ultimate aim is to achieve a comprehensive view of fundamental catalytic concepts, identifying the similarities and differences of related processes in chemistry and biology.

The targets range from the activation of small molecules in single and coupled catalytic processes to the elucidation and manipulation of biocatalytic processes in cellular systems. Each target is studied from both sides, i.e. using chemical and biological catalysis. This research concept is unique, both nationally and internationally.

"Unifying concepts in catalysis" means that we identify common reaction mechanisms in chemical and biological catalysis and bundle competences and methods from different disciplines within an integrated approach. In this context, UniCat aims to detect key parameters that control the mechanisms and dynamics of specific catalytic processes at different levels of complexity of the systems and to identify the similarities and differences in the concepts ruling heterogeneous, homogeneous, and biological catalysis.

In addition, a more general understanding of catalysis is promoted in order to pave the way towards a knowledge-based prediction of catalyst performance and potential new applications.

The result of the strengthening of the cluster team through strategic appointments, the successful development of a methodological toolbox and the increased interactions between chemical (Area D) and biological (Area E) catalysis is reflected in UniCat's research structure focused on similar targets (see below). 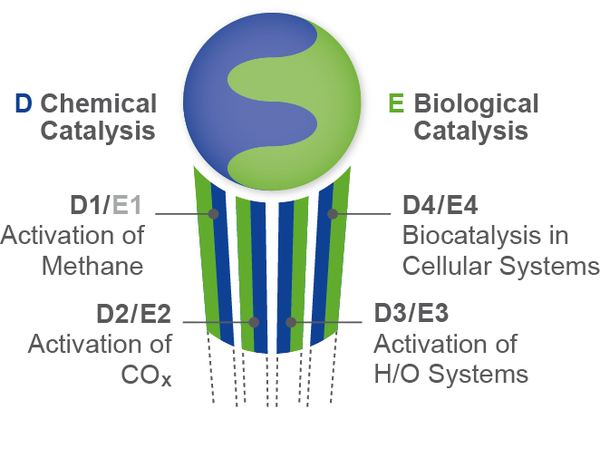 The projects in both areas are intertwined to form four research bands devoted to the same or similar target processes in chemical and biological catalysis.

Three Research Bands (D1/E1, D2/E2, and D3/E3) are dedicated to elucidating the activation mechanisms of small molecules (methane, carbon oxides, dihydrogen, dioxygen, water, and hydrogen peroxide), processes of utmost importance in nature and technology. To gain insight into the molecular coupling mechanisms as a prerequisite for designing novel tailor-made systems, catalytic hybrid systems are developed, aiming at the yet unknown combination of chemical and biological catalysis within one system.

These challenges constitute a bridge to the fourth Research Band D4/E4 that is dedicated to multi-component enzyme complexes for producing peptide antibiotics and light-gated controlling of physiological processes. This may pave the way towards medical applications; for example in optogenetics, harboring the potential to control cell function with light in the field of neuroscience.

Protein modification through the expansion of the genetic code to non-natural amino acids, prepared by innovative synthetic routes, is essential for mechanistic and structural analyses and for the knowledge-based design of novel enzyme complexes with modified or new functions.

Central to the success of all projects is the availability of a wealth of tailored experimental and theoretical methods that are suitable for multi-scale analysis and in-situ monitoring of (bio)catalytic reactions in highly complex environments.