is this year’s winner of the Gerhard Ertl Lecture.

The lecture will be followed by a reception in the "Planck-Lobby" of the building.

Helium is an element of many superlatives. It is, on the one hand, the smallest and most inert of all atoms and, on the other, the second most abundant element (after hydrogen) in the universe. The bosonic nature, small mass and weak intermolecular forces explain why it is the only substance that remains liquid down to zero Kelvin and the only naturally occurring superfluid.

Small clusters of helium in highly expanded atomic beams also exhibit the most extraordinary behavior of all naturally occurring elements. For example, the He-He scattering cross section approaches 259,000 Å2 at T → 0. The dimer is the largest diatomic molecule with a bond distance of <R> = 52 Å (e.g. H2:<R> =0.75 Å). In an extraordinary experiment in 2015, the He trimer was found to have a huge Efimov state with more than 100 Å size, making it one of the largest of all molecules, comparable to a DNA molecule. This is the first observation of the size of this counter-intuitive quantum species predicted by Efimov in 1970.

Droplets with 103 – 104 are also readily produced in cryogenic free jet expansions and are studied via the spectroscopy of embedded closed-shell heliophilic molecules. In the infra-red small molecules (e.g. OCS, SF6) have extraordinary sharp rotational lines indicating that the molecules rotate freely inside the droplets. This made it possible to determine their temperature which is only 0.37 K (~ 0.1 K in 3He). Several subsequent experiments confirm that the droplets show many of the hallmarks of bulk superfluidity. These experiments have established that finite-sized 4He droplets are superfluid making them the coldest and gentlest of all matrices for spectroscopic studies.

Present day experiments are directed at extending the spectroscopies to large organic and biomolecules, to exploring the unique structures of cryo-organised clusters and their chemical reactions. The recent demonstration of laser alignment in the cold droplets and femto-second pulse-probe experiments open up new avenues for dynamical studies. Also the first successful electron diffraction experiments and X-ray diffraction experiments carried out at SLAC on individual pure and doped droplets point the way towards many new exciting areas of research in physics, chemical physics and chemistry.

From subway station U Thielplatz to the Harnack House 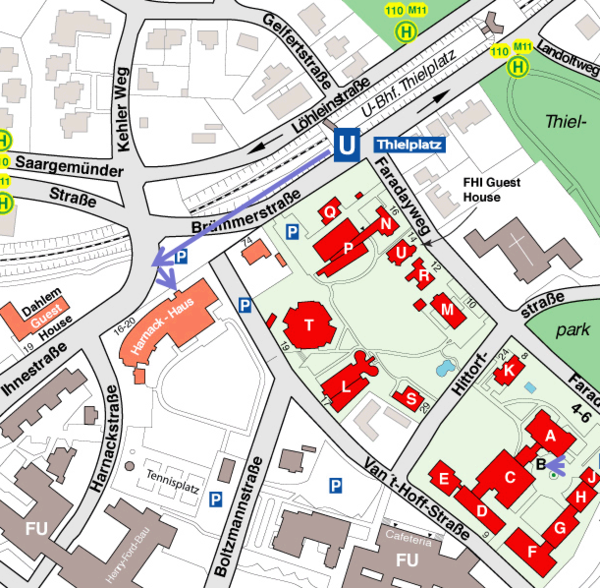 How to get to the Harnack House (external link)