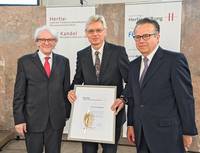 The non-profit Hertie Foundation today honored UniCat Professor Peter Hegemann in St. Paul's Church in Frankfurt for his many years of outstanding research achievements by awarding him the Hertie Senior Research Professorship in Neuroscience in the amount of 1 million euros.

This award honors the life work of an outstanding neuroscience researcher and his contributions to the exploration of sensory photoreceptors. Hegemann developed the key tools for a technology - optogenetics - that enables detailed insight into the functions of specific cells or living tissue via light.

The aim of the endowed professorship is to make use of the research potential of excellent, experienced scientists and to honor many years of outstanding achievements. At the same time, it offers young scientists an attractive and competitive position.

"The Hertie Senior Research Professorship is a wonderful confirmation for my working group, and may be an incentive to in future continue to support basic research that is driven simply by scientific curiosity," states Hegemann.

Peter Hegemann
After studying chemistry in Münster and Munich, Peter Hegemann received a doctorate degree under Dieter Oesterhelt at the Max Planck Institute of Biochemistry in Martinsried, before he took a post-doctoral position at Syracuse University in New York. After stays in Munich and Regensburg, he came to Berlin, where he has been Professor for Experimental Biophysics at Humboldt-Universität zu Berlin since 2005. In 2013, Peter Hegemann received the renowned Leibniz Award of the DFG and the European "Brain Prize" for his seminal research on sensory photoreceptors, which serve as a basis for optogenetics. Hegemann has been a UniCat member since its foundation in 2007 working in the Research Fields D4 and E4.