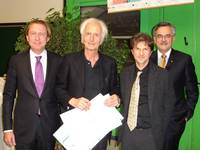 The Department of Chemistry of the Technische Universität München (TUM) and the Jürgen Manchot Foundation have awarded Professor Helmut Schwarz, a Chemist in the UniCat Cluster of Excellence and President of the Alexander von Humboldt Foundation, the Manchot Research Professorship 2012. With this award, the TUM wishes to honour Professor Schwarz for his groundbreaking work in the explanation of essential processes in chemical reactions and for his continuing work on developing the technique of mass spectrometry.

With his pioneering research work, Helmut Schwarz, who is also Professor of Physical Chemistry at the TU Berlin, has come up with the answers to a wide range of questions concerning the reactivity of and the establishment and breaking of bonds in molecules, and the characteristics of highly reactive chemical species. His most important tool for this work is mass spectrometry, and he has made a very significant contribution to the development of this technique.

Helmut Schwarz uses the special characteristics of mass spectrometry to examine metal oxides, ions and other reactive species in isolation. This has allowed him among other things to gain valuable knowledge of the principles of metal-mediated bond formation, which in turn means that he has been able to contribute a great deal to our understanding of catalytic processes.

Discrepancies in the explanation attempts of other researchers led Schwarz to develop the concept of “multistate reactivity”, based on which a reaction that is essentially “forbidden” can still take place if an intermediate product can transform into a different electronic state in the process. With the accompanying theoretical calculations, he was able to prove that in many chemical compounds a large proportion of the binding energy is attributable to relativistic effects without which the compounds in question could not be formed.

In the course of his research, Schwarz managed to demonstrate the existence of numerous small, highly reactive species that had previously only been detected in outer space or the existence of which had been predicted but which had never been successfully synthesised.   He successfully incorporated helium into the inner cavity of carbon compounds, which are similar in shape to a football, and by so doing he substantiated the theory of astrophysicists who had considered the existence of such species some 40 years ago.

Following an apprenticeship as Chemical Laboratory Assistant with Dynamit Nobel in Troisdorf from 1966 to 1971, Schwarz studied Chemistry at the TU Berlin. He obtained his PhD from the TU in 1972 and two years later he completed his postdoctoral lecturing qualification. Periods of study at the ETH Zurich, MIT in Cambridge (USA) and the University of Cambridge (UK) followed his appointment as Professor of Theory and Practice of Mass Spectrometry at the TU Berlin. Schwarz has been Professor of Inorganic Chemistry at the TU Berlin since 1983. More than 900 publications bear witness to his exceptional academic productivity.

The Jürgen Manchot Foundation, represented by Wilhelm Manchot’s great-grandson and Jürgen Manchot’s son, Thomas Manchot, awards the Wilhelm Manchot Research Professorship annually to exceptional chemists. As well as acknowledging the scientific work of the recipient, the Foundation also funds a teaching post for them at the Department of Chemistry of the TU München. The award is in memory of chemist Wilhelm Manchot (1869-1945), who was Professor and Director of the Inorganic Chemistry Institute of the then Technical University of Munich from 1914 to 1935. He was also exceptional for his skills as a university teacher and is remembered for his translation into German of the standard work on inorganic chemistry that is familiar to every student even today as the “Hollemann-Wiberg” textbook.