As others see it ... Professor Douglas W. Stephan from Toronto University. 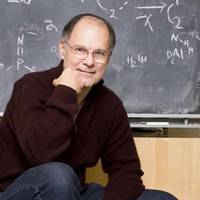 Douglas W. Stephan is professor of chemistry and a member of UniCat's Scientific Advisory Board (SAB) whose members are internationally renowned experts in catalysis research.

"Our task, as I see it, is to keep an eye on the big picture for UniCat. You might lose sight of that if you are too deeply involved in everyday operations. The Advisory Board brings together expertise in catalysis research from all parts of the world. With this outside perspective, we hope to bring some good ideas and suggestions to Berlin - and we will also take some¬thing back with us.“

As an internationally renowned scientist, he does not find it difficult to provide an assessment often years of UniCat in Berlin: „1 see two main reasons for Unicat's internation¬al success: on the one hand the high -2 degree of interdisci- | plinarity. Catalysis is by its nature, an interdisciplinary research area. This is implemented par¬ticularly effectively here in Berlin, where scientists from the fields of Chemistry, Biology, Chemical Engineering and various other research areas work to-gether closely. From this approach, research results have emerged that would otherwise never have been possible.

I have experienced this myself. I think the second success factor is the good exchange of ideas in a spirit of partner¬ship with the chemical industry in Germany. That is not possible in many other countries."

Douglas Stephan considers the German approach of promoting excellent research in larger clusters to be the right one: „In Canada, we have been working for years to obtain comparable funds and support - so far without suc¬cess." He thus finds it all the more logical to continue this work within the framework of UniSysCat in the Strategy of Excellence: „The approach of UniSysCat to investigate catalysis in larger systems is logical."

As an Einstein Visiting Fellow of the Einstein Foundation Berlin, Douglas Stephan spends several months in Berlin every year. There he cooperates very closely with the teams of Professor Matthias Driess and Professor Martin Oestreich. In addition, he serves as co-advisor for two doctoral candidates from each group. The focus of his research is on the use of main group elements in homogeneous catalysis. His current research is based on a method he developed to activate hydrogen by a metal-free catalyst and use it in the hydrogenation of unsaturated organic groups. This work has been recog-nized as pioneering in catalysis research. For many years he has been influential in the field of molecular chem¬istry and his work has attracted international attention.