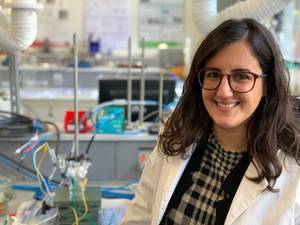 Dr. Marίa Escudero Escribano (Cáceres, Spain, 1983) graduated in Chemical Engineering (best grades of her class) from the University of Extremadura (Spain). In 2011, she obtained her PhD in Chemistry from the Autonomous University of Madrid (Spain) with her PhD Thesis on Electrocatalysis and Surface Nanostructuring, supervised by Dr. Angel Cuesta. During her PhD, she spent two research stays abroad, at Argonne National Laboratory (US) with Dr. Nenad Markovic, and Ulm University (Germany) with Prof. Wolfgang Schmickler. She received several awards for her PhD work, including the SusChem Young Chemistry Researcher Award 2011 and Best PhD in the region of Madrid 2012 by the Spanish Royal Society of Chemistry.

In 2012, she started her postdoctoral research with Prof. Ib Chorkendorff and Dr. Ifan Stephens at the Technical University of Denmark, where she investigated novel electrocatalysts for the oxygen reduction reaction in fuel cells. She discovered that Pt-lanthanide alloys are very efficient catalysts for this reaction, and their catalytic properties can be controlled by tuning the Pt overlayer structure (Science, 2016). In 2014, María was awarded the ‘Sapere Aude: Research Talent’ Grant (Danish Council for Independent Research), and she was visiting scholar (2015-2017) at Prof. Thomas Jaramillo’s group at Stanford University (US), where she investigated oxide nanocatalysts for electrochemical water splitting.

Since March 2017, Marίa is Tenure-track Assistant Professor at the Department of Chemistry and the Nano-Science Centre at the University of Copenhagen. She leads the NanoElectrochemistry and Sustainable Catalysis group, currently formed by 10 researchers (three postdoctoral fellows, four PhD students, two MSc students and one BSc student). Her group investigates tailored electrochemical interfaces for sustainable energy conversion and synthesis of clean fuels and high-value chemicals. In 2018, María received the prestigious ‘Villum Young Investigator’ Grant from the Villum Foundation (Denmark).

María’s significant contributions to the fields of electrocatalysis and electrochemical surface science have resulted in 30 publications in high impact factor journals, including Science, Nature Chemistry, Nature Materials, JACS and Angewandte Chemie. Moreover, she is co-inventor of three patents. She has presented her work at several international conferences, including more than 15 invited talks. She is Chair of the Danish Electrochemical Society since 2018 and Early Career Advisory Board Member of ACS Catalysis (2018-2019). María has received numerous awards in recognition of her early career achievements, including the European Young Chemist Award 2016 (EuChemS), the Princess of Girona Scientific Research Award 2018 and the Electrochemical Society Energy Technology Division Young Investigator Award 2018.

Dr. Escudero-Escribano’s research aims to: (i) understand the structure of the electrochemical interface and the catalytically active site at the atomic and molecular level, (ii) tune the structure-activity-selectivity relations for electrochemical energy conversion and electrosynthesis of renewable fuels and chemicals. Her group combines electrochemical methods with in situ optical spectroscopic and microscopic techniques, gas chromatography-mass spectrometry and in situ synchrotron-based characterisation techniques.