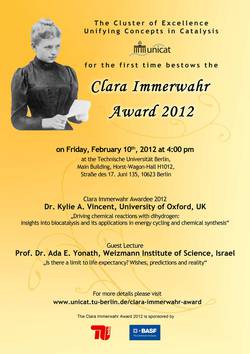 Dr. Kylie Vincent from Oxford University is the first winner of the Clara Immerwahr Award, conferred by the Berlin Cluster of Excellence UniCat.

On 10th February 2012 the award will be given at a public ceremony. The prize aims to reward excellent young female scientists in the field of catalysis. Kylie Vincent’s research is based on the production of hydrogen from water and the reverse reaction, the generation of electricity from hydrogen and oxygen with the aid of enzymes.

Internationally renowned scientist and winner of the Nobel Prize in Chemistry, Professor Ada Yonath, will give a lecture as part of the ceremony on 10th February 2012. This year the prize is financed by BASF, one of UniCat’s partners in industry, and the TU Berlin.

Journalists are cordially invited to the press conference and a subsequent guided tour of a laser laboratory:

“Unifying Concepts in Catalysis” (UniCat) is an interdisciplinary research network within the framework of the Excellence Initiative of the German Research Foundation. Its main focus is on catalysis. Four universities and two Max Planck Institutes are involved in UniCat in the Berlin region. A total of more than 50 working groups collaborate on research areas that are of major interest to future scientific developments in fields ranging from the chemical conversion of natural and biogas, the activation of carbon dioxide and the creation of hydrogen from light and water, to the synthesis of active ingredients using enzymes. The Cluster is hosted by the Technische Universität Berlin. UniCat receives funding of approximately €5.6 million each year as part of the Excellence Initiative.