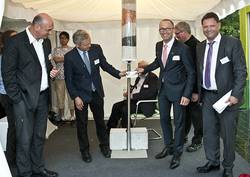 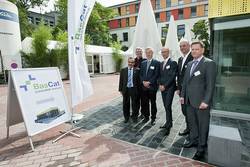 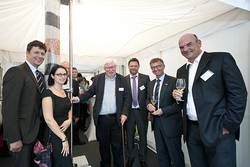 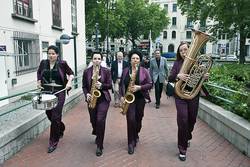 The Cluster of Excellence Unifying Concepts in Catalysis (UniCat) and BASF SE officially opened their joint laboratory, BasCat at the TU Berlin today. Thus, the Charlottenburg campus is enriched by another science building. On the roughly 1,000 square meters of laboratory and office space 17 scientists will be researching the fundamentals of heterogeneous catalysis for material change, and promoting the search for alternatives to petroleum.

The research partners are working groups, among others, from the Departments of Chemistry, Process Technology, and Materials Science at the TU Berlin and from the Department of Inorganic Chemistry at the Fritz-Haber Institute. Since the signing of the cooperation agreements between BASF and the TU Berlin in 2011, a number of projects have been started. With the new facilities, BasCat now gains a joint research centre for heterogeneous catalysis under one roof.

The total amount for BasCat is around 13 million euros for the first five years. BASF SE is investing up to 6.4 million euros. The TU Berlin and the Cluster of Excellence, UniCat is contributing roughly the same amount. The BasCat building is on the TU Berlin South Campus next to the Eugene-Paul-Wigner building on Hardenberg Street. It is led by the scientific directors, Dr. Frank Rosowski, BASF, and UniCat Chair, Prof. Dr. Matthias Driess. For strategic decisions regarding the research program a BasCat steering group was also set up, in which all partner institutions are represented.

Dr. Knut Nevermann, the undersecretary for Science of the Berlin Senate department for Education, Youth and Science, was among the guests at the opening ceremony. “In applying as a Cluster of Excellence, ‘Unifying Concepts in Catalysis’, the Technische Universität Berlin recognized the signs of the times early on and has successfully positioned itself. With BASF, the leading ‘global player’ was won as a cooperation partner, and was willing to provide a clear investment. Today, we can see the fruits of this cooperation through infrastructural progress", said Dr. Knut Nevermann.

Prof. Dr. Christian Thomsen, TU Berlin President, explained at the occasion of the BasCat opening: “Through the cooperation between the Cluster of Excellence UniCat and BASF, catalysis research has gained a new home at the TU Berlin. In the BasCat joint laboratory, promising, high quality research will be carried out, which will benefit society. The scientists are making valuable contributions in securing the supply of energy and raw materials. We are pleased that we came together with strong partners, with whom both cutting edge research, as well as excellent doctoral education, is made possible in the new laboratory”.

"Heterogeneous catalysts make many chemical reactions more cost-effective, more environmentally friendly, or even possible in the first place. Especially in the age of dwindling resources, energy and raw materials efficiency is becoming increasingly important", says Dr. Peter Schuhmacher, head of BASF's Competence Centre “Process Research and Chemical Engineering" and a member of BasCat’s steering committee. "Together with our internationally renowned partners we want to gain fundamental scientific insights into the activation of less reactive molecules, in order to bring about the long term acceleration of the development of industrially relevant catalysts”.

"In the UniCat Cluster of Excellence synergies between chemical and biological catalysis are explored, to make innovative contributions to energy transition and drug discovery," says Prof. Dr. Matthias Driess, chair of UniCat and, together with Dr. Frank Rosowski, the scientific director of BasCat. “Not least due to BasCat will the UniCat spirit of exploration and discovery become the centre of gravity in catalysis research in Germany, developing new experimental and theoretical solutions for raw material change.”

BasCat offers with its three areas of research; synthesis, spectroscopy, and catalytic reactions, the basic requirements to develop new methods as well as to conduct extensive studies on innovative catalyst materials and reaction conditions. The long term goal is the supply security of raw materials for the manufacture of chemical products. The current research program deals with the oxidative activation of less reactive molecules of natural gas. The key and time determining factor for the realization of new processes is the successful search for long-term stable, resource-efficient, and sufficiently active catalysts. The current objective of catalysis research is, as before, the understanding of the nature of the surfaces of reactive catalysts. This developed, fundamental knowledge should lead to a catalyst design concept that allows the prediction of catalyst performance and serve as an important building block in accelerating the targeted search for innovative catalysts.

With the new BasCat Laboratory the Charlottenburg Campus gets another modern research building. Just recently, an energy laboratory and a house of Biochemistry was opened. In addition, the Wüstenrot Foundation announced at the end of 2013 that it will provide 3.5 million euros for the renovation of the large pink circulation tank on the Charlottenburg Campus, so as to protect the extraordinary architecture and to enable further research to be conducted in the building.

"Unifying Concepts in Catalysis" (UniCat) is an interdisciplinary research network, established as part of the Excellence Initiative of the German Federal and State Governments, whose central theme is catalysis. UniCat is supported by four universities and two Max Planck Institutes in Berlin and Potsdam. About 45 working groups collaborate across disciplines on research topics relevant to the future of raw material change and the energy transition: from the chemical conversion of methane to ethylene, the chemical and enzymatic activation of carbon dioxide through the catalytic production of hydrogen from water using sunlight as an energy source, to the synthesis of drugs with the help of artificial enzymes. The Technische Universität Berlin is the host University.