Power of catalysis: Activation of oxygen and hydrocarbon materials

The Cluster of Excellence, "Unifying Concepts in Catalysis" (UniCat) will present Dr. Anna Company Casadevall of the University of Girona, Spain, the Clara Immerwahr Award on 13 February 2015 at the Technische Universität Berlin. 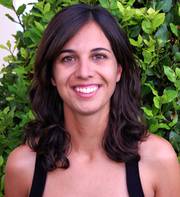 The chemist is being honored for her outstanding contributions to the field of bioinorganic chemistry, in particular for the synthesis of high-valent organometallic complexes. These play a crucial role in the elucidation of metabolic processes in living organisms. In most cases, the metals present themselves here as active protein (enzyme) centers. These metals are essential for the function of the enzymes. Exchanging one of these metals results in the loss of, or a significant change in, the function of the enzyme.


The event will be conducted in English.

Presentation of the Clara Immerwahr Award

Anna Company Casadevall’s primary area of research is the activation of small molecules such as nitrous oxide (N2O), oxygen (O2), carbon dioxide (CO2) and carbon monoxide (CO) through the use of bioinorganic metal complexes. The organic ligand precursors used by Anna Company Casadevall are biological systems, such as enzymes, and are recreated with transition metals such as copper, iron and nickel. The resulting model catalysts are then tested with environmentally friendly oxidants and characterized by the resulting intermediates and products.

Anna Company Casadevall will use the prize money for joint research projects with the Cluster of Excellence UniCat. The aim of the planned work is to study high-valent copper-oxide species, together with Dr. Kallol Ray of the Humboldt University of Berlin. These centers are postulated to be reactive intermediates during the biological oxidation of methane, but have not yet been successfully isolated.

The Clara Immerwahr Award is conferred by the Cluster of Excellence UniCat to honor an exceptional young female scientist in the field of catalysis, and invites the recipient to cooperate with UniCat working groups. The award will be presented in 2015 for the fourth time. It sets an example for the promotion of excellent female scientists and is a measure taken by the Cluster promoting women. Further activities undertaken by the Cluster to advance gender equality include, for example, gender sensibility seminars, professionalization of UniCat members, the establishment of guest scientist programs for female scientists, and the creation of Success Teams.

The annual Clara Immerwahr Award carries a 15,000 Euro prize and is publicized internationally. This year the prize was financed by Siemens and the TU Berlin. The prize is given in honor of Dr. Clara Immerwahr, who in 1900 was the first German woman to receive a doctorate for her work in physical chemistry from the Universität Breslau.

“Unifying Concepts in Catalysis” (UniCat) is an interdisciplinary research network within the framework of the Excellence Initiative of the German Research Foundation. Its main focus is on catalysis. Four universities and two Max Planck Institutes in Berlin and Potsdam are involved in UniCat. Approximately 50 working groups collaborate across disciplines on research areas that are of major interest to future scientific developments in raw material change and energy turnaround. The areas studied by the working groups include the chemical conversion of methane to ethene, the chemical and enzymatic activation of carbon dioxide, the catalytic production of hydrogen from water using sunlight as the energy source, and the synthesis of active substances with the help of artificial enzymes. The Technische Universität Berlin (TU Berlin) is the host University.

More information on the UniCat Cluster of Excellence’s activities promoting gender equality can be found at:
www3.unicat.tu-berlin.de/Gender.54.0.html