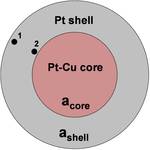 Hydrogen fuel cells are a green alternative to fossil fuels for powering vehicles, since the byproduct of fuel cell energy production is simply water. A problem with using fuel cells is their high cost, largely due to the use of the expensive element platinum in their design. The platinum is used at the cathode of the fuel cell, where it catalyzes the reduction of oxygen molecules into oxygen atoms. It is a good choice for this role because it binds the reactant well, breaks the O-O bond efficiently, and doesn’t bind too tightly to the products.

A collaboration between SIMES, SSRL, the University of Houston and the Argonne and Oak Ridge National Labs has obtained a fundamental understanding of a method used to increase the reactivity of platinum so that 80% less needs to be used for the same power generation. Using so much less platinum would allow a dramatic reduction in fuel cell cost. To accomplish this, the University of Houston research group of Peter Strasser reacted platinum with copper then partially removed the copper, in a process called dealloying, leaving the platinum in a different configuration. The SSRL research groups of Anders Nilsson, Hiro Ogasawara and Mike Toney analyzed the structure of the dealloying materials at SSRL beam lines 2-1, 4-2 and 13-2; this revealed that the increased reactivity was due to lattice strain between the platinum atoms. Because of decreased spacing of atoms at the surface, the platinum creates weaker connections to the oxygen atom products and thus has better reaction rate.

The researchers plan to test other processes that alter platinum structure, aiming to further optimize its reactivity and reduce the amount required for fuel cell use. This research brings us a step closer to making a green energy alternative affordable. This study was published on April 25 2010 online and will appear in the June issue of the journal .

You can find the full article of Peter Strasser et al. on "Lattice-strain control of the activity in dealloyed core–shell fuel cell catalysts": Research\Research Highlights