A5 Linking homogeneous and biocatalysis

State of the art

Biological catalysts are known to activate small molecules and facilitate the manufacture of products of added value, usually at ambient temperature and pressure. 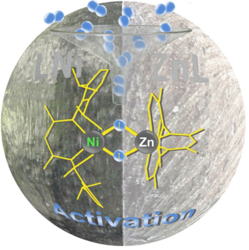 To reach a more detailed understanding of metalloenzymes on a molecular scale, it is first necessary to reduce the level of structural complexity. Low molecular-weight analogues, that is, molecular metal complexes, can be very valuable for analysing the spectroscopic signatures as well as structural and electronic parameters of active sites in metalloenzymes.

Depending on how far the exploration of the coordination active site(s) in the enzyme has advanced, biomimetic models can help to determine the nature of the active site or the effect of the coordination environment on its electronic structure, and hence its spectroscopic signatures. The information obtained for model compounds can then be used to determine the active site structures of intermediate states, on the basis of spectroscopic studies. Finally, such models may aid in the design of bio-inspired catalysts that aim to achieve performance similar to that of enzymes, albeit using a lower level of complexity.

The goal of this research field is to establish a biomimetic/bioinspired approach to coordination compounds which helps to obtain reliable information about enzymatic reaction mechanisms in metalloenzymes, in collaboration with research area B. This aim is conceptually related to the in situ studies on the new Mo-based systems intended for methane activation and directly links the results in this field and in A3.

The joint efforts to elucidate the reaction mechanisms of enzymes may enable the understanding of unifying principles that bridge the gap between homogeneous and biocatalysis. In the long term we are targeted on the development of a rational design for bioinspired compounds that aim to reach enzymatic efficiency, but at a lower level of complexity.

In the current funding period biomimetic research has focused mainly on two biological backgrounds: Obviously the NiFe hydrogenases formed one of those, since hydrogen, its access and activation is currently intensely pursued, and corresponding research is linked to the efforts of our colleagues in the B area. Secondly we are interested in oxygenating non-heme iron enzymes, like the soluble methane monoxygenase (sMMO), as they may teach us how to efficiently use O2 for oxygenations. One important aspect concerns the redox cooperativity metal <-> ligand or metal <-> metal in conjunction with substrate and product binding (H2, O2, H2O). Progress made in this field will certainly help to unravel the nature of active sites and to develop more effective artificial catalysts.

It should be emphasised, that within A5 we are dealing not primarily with the development of applicable catalysts but with unravelling the basics that allow for catalysis in enzymes; only in the long term the knowledge gathered may then be used for the construction of biomimetic or bioinspired catalysts.

Preparation of molecular compounds modelling intermediates proposed as part of the cycles, so that their spectroscopy and chemical behaviour can be investigated and compared with suggested mechanisms

Development of complexes that are bioinspired but modified on purpose to elucidate possibilities not available to nature and in order to identify pre-requisites, advantageous properties and interesting candidates

The results may support or defeat proposals made concerning the structure, function and/or spectroscopic signatures of enzymes or even create new ideas.

In this context, the following achievements of A5 may be mentioned:

Since the key intermediate of the catalytic cycle of [NiFe] hydrogenases contains a bridging hydride ligand, the studies concentrated on the chemistry of dinuclear and trinuclear nickel hydride complexes, which proved to be functional with respect to H2 elimination as well as subsequent H2 up-take and which catalyse H/D exchange. [1]

To mimic the active centre of sMMO, a functional model could be developed, which provided valuable insights, not only with respect to the modelling of sMMO [2] but also, more generally, into elementary reaction steps that may be relevant for oxygenating non-heme iron enzymes.[3]

In parallel, novel artificial Ni-based oxygenase and dioxygenase systems were synthesised and their mechanisms in oxo-transfer to organic substrates were elucidated in collaboration with groups from theory and spectroscopy.[4-6] This work could also be extended to sulphur.[7]

With a dinuclear copper complex modeling the active site of the particulate MMO O2 was activated leading to a [Cu-O-Cu] unit, that has been proposed as the active site of methane-oxidising Cu-grafted zeolithes and which may also be of relevance for the pMMO functioning, thus linking biological to homogeneous and heterogeneous catalysis.[9]