Creating a Parallel Biological World with a Genetic Firewall

In the UniCat Cluster of Excellence in Berlin, a new concept is being developed by biochemist Nediljko Budisa in collaboration with French biologist Philippe Marlière that aims to equip industrial bacteria for new catalytic functions. They call this new technique codon emancipation. At the same time a genetic firewall is established, making the bacteria dependent on a special growth medium. This means that they cannot survive in a natural setting, making the transfer of genes into the environment impossible.

Budisa and Marlière hope to replace old-fashioned natural chemistry with a new type of science. This development is to be achieved through the directed evolution of more natural, faster-growing bacteria in a test tube. “These cells are, in a manner of speaking, in a parallel world,” explains Budisa. They cannot exchange their genetic information with other creatures; they are equipped with a genetic firewall.” 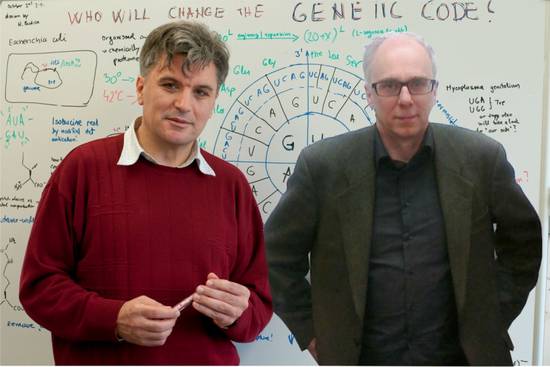 At the start of the process the bacteria will in fact grow very badly in the synthetic growth medium with the non-natural amino acids. But by cultivating them for several generations, they will eventually become codon emancipated. Codon emancipation offers the possibility of providing living systems with new chemistry. On the one hand, the way to artificial biological diversity is viewed with scepticism in scientific circles. But on the other, if the process is successful then the resulting cells will be enormously useful in industry. For example, new environmentally friendly bio catalysts for manufacturing fuel, new active ingredients for medicinal products and more environmentally friendly biomaterials are just some conceivable uses. At the same time this project provides the scientific community with an opportunity to consider problems and misgivings concerning the biosafety of synthetic organisms and to address these publicly.

The chemically modified bacteria will theoretically be viable for an unlimited period of time in genetic isolation from natural species. As soon as the non-natural amino acids are no longer provided in the growth medium, they will die. The codon emancipation therefore constructs a "genetic firewall" against a potential genetic exchange between artificial and natural cells.

Philippe Marlière explains, “We plan to rewrite the entire genomic text of the microbes in the test tubes through cumulative mutations, creating quick-growing cells with permanent evolutionary pressure. To do this, we have developed an automaton, what is known as a “gene machine” over the course of the last ten years.”

These developments are at the forefront of synthetic biology. The work of the renowned Americans Craig Venter and George Church is in contrast more or less within the framework of classic genetic engineering, based as it is on the copying and resynthesising of structures that are present in nature with the help of synthetic DNA oligomers.

Matthias Driess, Chair of the UniCat Cluster of Excellence, is enthusiastic about the prospects for the work based on the joint expertise of Budisa and Marlière. “This will be an excellent reinforcement to the bio part of our Cluster. Philippe is a superb innovator, while Nediljko is an original thinker with a superb intellectual profile and a hard worker who has followed his own original ideas and ambitious targets for decades, without being distracted by the scientific mainstream or the fashions in the German research scene, by which I mean he successfully swims against all the tides. We anticipate not only the development of a unique whole-cell catalyst, but also the development of artificial life forms with functions that have not yet been invented by natural evolution.”

The genetic code and the concept of codon emancipation

The genetic code was solved in 1966 and is identical for all living creatures. This means that in every organism, a specific sequence of nucleic acids in the DNA carries the same protein molecule.

The genetic code determines the way in which the sequence of bases adenine (A), cytosine (C), guanine (G) and thymine (T) are translated into protein. Every three bases stand for one amino acid, in a triplet known as a codon. There are only 64 codons that generate 20 amino acids. This means that the majority of amino acids are encoded by several codons.

For example, the amino acid arginine can be represented using the six codons CGG, CGA, CGC, CGU, AGG and AGA. AGG and AGA are used very seldom in bacteria such as Escherichia coli. Thus theoretically, for example, all AGGs in the genetic makeup of a living creature could be allocated a new, non-natural amino acid. The cell is then said to be codon emancipated, meaning that the old chemistry has been replaced with new.